Clinical and Translational Gastroenterology now has an Impact Factor and makes its debut at a noteworthy 3.472*

ACG is pleased to announce that Clinical and Translational Gastroenterology has received a 2015 Impact Factor of 3.472*, making it the top-ranked open access journal in gastroenterology and hepatology! This is an important achievement that would not be possible without the time and efforts of the editors, authors and reviewers. Thank you all for your support!

Meet the CTG Editorial Board

ACG and CTG sincerely thank Ashwin Ananthakrishnan, MBBS, MPH, for his service as CTG Associate Editor from 2014 to 2016. His dedication and expertise were integral to the success of the Journal.

Noteworthy in 2016 from Clinical and Translational Gastroenterology 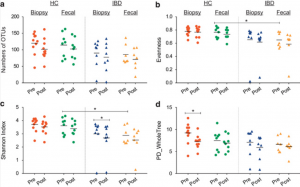 This study demonstrated that the human biome is markedly altered by gut lavage as in preparation for a colonoscopy. Importantly for inflammatory bowel disease (IBD), the healthy bacteria that reside in the gut lumen are generally reduced in amount, with smaller effects on bacteria adherent to the mucosa such as bactericides — a species associated with pathology in IBD. These findings implicate important variables for biome research methodology, and suggest that bowel prep may contribute to emergence of a more pathogenic microbiome milieu in some patients. 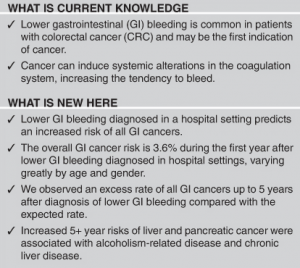 This nationwide cohort study from Denmark evaluated the risk of various GI cancer types in patients with their first hospitalization for lower GI bleeding. Subjects were followed for 10 years. During the first year of follow-up, the absolute GI cancer risk was 3.6%, with the standardized incidence ratio (SIR) of any GI cancer at 16.3. The majority of cancers were colorectal, and the risk dropped for all cancers over five years except for liver and pancreatic cancer. 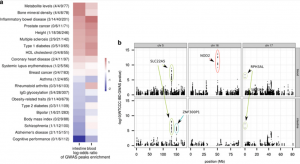 Patients from an IBD clinical trial who failed anti-TNF therapy were evaluated for genetic variants associated with altered gene expression in blood (leukocytes) and intestinal mucosa. Distinct patterns were identified that overlapped other inflammatory diseases in some cases, but others that were more specific to IBD. The findings bring insights into the mechanisms underlying IBD by linking specific genetic variants with predictable changes in proteins within key tissues and systems.

This study describes a novel approach to assessing pancreatic exocrine function that is potentially simple, powerful and possibly suitable to screen for some types of pancreatic diseases. Pancreatic proteins were found in whole gut lavage fluid (WGLF), which is the fluid from oral bowel preparation for colonoscopy. Surprisingly, two thirds of the proteins in this fluid is of pancreatic origin! Furthermore, because of the gut lavage process, most of the other exogenous components of human stool have been eliminated. Using LC-MS/MS, the authors demonstrate that pancreatic proteins could be identified and quantified in a reliable and reproducible way, and that their findings roughly matched the findings of others using more-invasive methods. This could be a very exciting and potentially powerful approach to more-comprehensive measures of biomarkers of pancreatic exocrine secretory function.

Do you have a manuscript that may be good for CTG?

Please read our guide to authors and submit to our manuscript site today. Submission is free and discounted author processing charges are available for ACG members as well as manuscripts transferred from The American Journal of Gastroenterology. Contact Lindsey Topp in the editorial office with questions: ltopp@gi.org